Sharon Larkin in Poetry April 17, 2017April 18, 2017 310 Words
Kathryn’s poem – Moving on, *for Frank – was originally included in the Special Edition. Over the holiday weekend, it met with such approval and delight from her father, that the poem now has its own feature – below – with another photograph of Frank, aged 91 years, reading the poem on Kathryn’s laptop!
………….

I give you walks through woods,
the crisp of tiny feet on leaves
in chase of squirrels,

toadstools you said were fairy rings,
how so many wild things
watched us, unseen,

your song of bunnies safe asleep
from Jack Frost and Billy Wind,
and how I should do the same.

I give your tracks in gorse,
golf ball finds,
a sudden flap of crows.

Pools, heath-land streams, and how
you could stand in the middle of it all
and not see a city anywhere.

and where the family sleeps with flowers,
and voices and faces,
and digging the summer garden.

How you chopped down the old trees,
how your new Japanese Cherries blossomed,
just before you had to leave them. 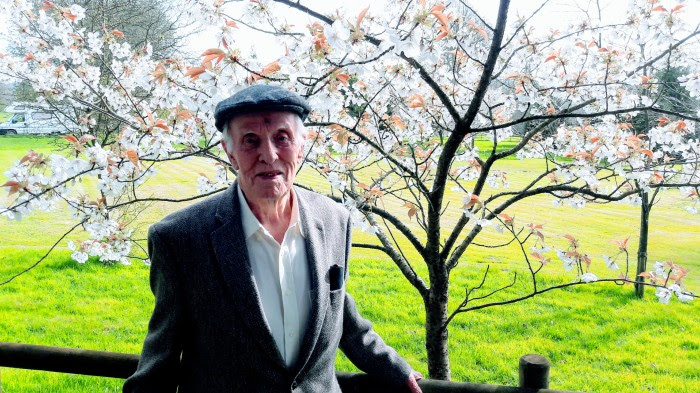 One thought on “A poem by Kathryn Alderman”